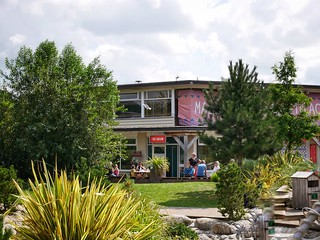 Back in 2016, BB sang the praises of the Fountain Restaurant, an overlooked and increasingly neglected modernist gem in the centre of Chester Zoo. (The design of the Fountain was apparently driven by the availability of the original windows, offered by Pilkington Glass after an order was cancelled.) Forced to close during the pandemic, the zoo spent the time catching up on various planning and administrative tasks, one of the results of which was a planning application in May 2020 to demolish the old Fountain building.

(What’s most amusing from the linked article is that the journalist clearly googled/plagiarised our original blog post for reference, a dangerous method given we didn’t verify any of our original sources - but then, we’re not being paid as a professional to do that. On the other hand, as one of the reactions in the ZooChat forum was “Backwater? Who writes this stuff?”, perhaps we’ll let the Cheshire Live journo carry the can.)

The building is not in good repair and apparently forms an unwanted barrier to movement across the ‘Madagascar Zone’. From the picture above, taken only recently, you can see that it is now obscured by the newly planted play area that has replaced the formal lawns and fountain originally in front. Stripped of this context, the building makes much less sense and in its current sorry state, BB regretfully concludes that demolition might as well go ahead given the changes to its surroundings. There was a brief window of opportunity there to rededicate it as a space for family time out amidst the sensory overload of the exhibits, but the loss of the gardens rather puts paid to that (the prevalence of tall grass planting and themed landscaping in the rest of the zoo suggests flower gardens are no longer a priority at Chester, which presumably lowers the maintenance budget as well). Not to mention, there was almost no likelihood of reopening the balcony and dining function (imagine being able to take tea while surveying the zoo like a true aristocrat though!).

Reaction on ZooChat has been mostly philosophical or accepting of the need for progress, with some commenting that it was a rather “mediocre” example of post-war modernism whose loss is to be little regretted. Apparently, zoos have other, more important functions than architectural preservation, who knew? (To be fair, all exotic bird species look the same to BB.) Zoos have always been unsentimental about removing or updating exhibits whose time has passed due to changing fashions or increased knowledge - even the lions have lately moved from the grassed enclosure they’ve occupied for decades to a fancy new simulated savannah at the other end of the park - so it’s little surprise that the Fountain is the latest victim of evolutionary trends. (After all, Bristol Zoo are quitting their central Clifton location altogether for a satellite site on the outskirts that offers more expansion, leaving their rather fine aquarium building amongst others to the tender mercies of housing developers.) But it is a loss, one more example of the ‘better future’ promised in the 1950s and 60s that somehow failed to come to pass, the remnants of which diminish further in number each year.

« A new light has come