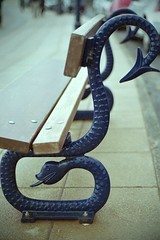 If you’re familiar with a certain place BB knows well, you’ll probably recognise the distinctively ornate and serpentine end of this public bench, being as it is entirely redolent of only one place. Yes, this is, of course, located in…

…Well actually, BB was going to say Aberystwyth, as for years we vaguely assumed they were unique to the promenade there, or at least to a certain type of mostly unpretentious Welsh resort - the scales and the forked tail putting us in mind of dragons rather than snakes, hence the mental association. (Despite the presence of Porthcawl in the list above, Bridgend Council actually stored one of their original benches during repair work and then somehow contrived to lose it. But then Bridgend Council appears to suffer from a debilitating mental block when it comes to benches.)

The other somewhat vague and indecisive thought was that someday, we might like to own one like it - until finally, in an idle moment’s Googling, we looked it up and discovered that bench ends like this actually originate on the other side of the country.

This is, in fact, one of the standard platform bench types employed by the North Eastern Railway, later subsumed into the LNER and subsequently the East Coast Main Line of BR. The LNER was never financially the strongest concern of the Big Four companies, particularly after the recession of the 20s and 30s hit the North Eastern coal traffic, and is widely recorded to have been on the verge of bankruptcy when the railways were taken into government control on the outbreak of WW2. During the fifties, rationalisation saw a lot of the intermediate stations and branches of the ECML closed, smaller places such as Alnwick and Seahouses losing their stations. At this time, local councils were able to acquire job lots of redundant former NER platform benches, hence their preponderance in Northumbrian towns such as Berwick (where they have since been maintained and renewed on a like-for-like basis). However, others remember them in situ before this period, so it seems likely that councils were already installing benches of this form anyway, and have continued to do so.

In fact, the pattern continues to be available in the current catalogue of the original foundry, the Ballantines Bo’ness Iron Works, and in those of their competitors. Ballantines went bust a few years ago but have since been bought out by a scion of the original family, so the manufacture of the serpent bench endures. Indeed, the pattern appears to have been an off-the-shelf option since Victorian times (note that the example above also retains the snake’s tongue, which is often reportedly lost as it is the most fragile part of the design). Today, new benches in this style are procured by councils from Logic. However, if you want one for your own garden, or at least a reproduction in non-corroding polyurethane, you can obtain one from Broxap. Warning: you might want a stiff drink to hand before following that link, it’s almost twice as much as BB has ever paid for a bench. Needless to say, an authentic, refurbished original could set you back at least twice that, although you can find the ends alone without slats for considerably less.

Credit to the contributors in the links above for their findings on this subject, particularly the posters in the LNER forum; BB’s own research effort amounts only to persistent Googling.