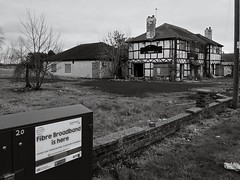 “Fibre Broadband is here”, proclaimed the sign on the BT cabinet next to the A41 layby grandly. Behind it lay the quietly mouldering remains of the Cherry Tree Hotel, the multiple voids in its shabby walls exposing its black heart to an apathetic 21st Century. Really, they had fast Internet? 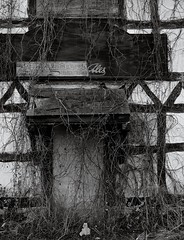 I left the car alongside the dual carriageway, parked in a scrubby bay shortly before the roundabout where the A49 broke free from a temporary embrace with its London-bound sibling to hasten south for the heady delights of Shrewsbury and the Marches. Clambering over a rough embankment thrown up to seal the Cherry Tree’s entropy off from the present day, I approached the building warily. Bare vines straggled over the walls and feebly attempted to tear down the former entrance porch. Entering would have been as simple as stepping through the maw of the french window, its vacant panes lying forlornly on the ground in front of it, but I had no intention of proceeding further in that direction without a hard hat and a hefty dose of YOLO. The sign above the front door was now blank wood apart from the lingering cursive of the word “Ales”, while the nameboard outside was now only a vacant frame topped with ornate ironwork and redundant spotlights. 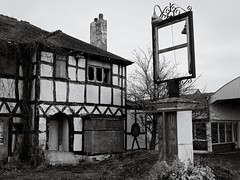 In its heyday, the Cherry Tree had been called the Witch Ball Inn and boasted a swimming pool and dancehall out back, cementing its status as a roadhouse of the 1930s, those roadside hotel/pubs seeking to mark themselves out as worthwhile destinations in their own right. Sited close to the A41/A49 junction at Prees Heath, south of Whitchurch in Cheshire, the Witch Ball later picked up custom from nearby RAF Tilstock, apparently proving popular with visiting American airmen stationed there during the war (although whether the swimming pool was then open under the restrictions of wartime austerity is a matter for speculation). Perhaps done to advertise its location to this lofty market, the building still carried the word “HOTEL” painted in large white letters on the roof. It was this more than anything that had first caught my attention while flashing past on the opposite carriageway, an echo of a half-remembered sight from my childhood - hadn’t all such places picked themselves out in this way at one time?

Walking over the mossy tarmac of the former car park, with a pair of spindly, unkempt trees clinging to their small stony island in the middle, no trace of the pool was visible to the rear. A large extension suggested that the Cherry Tree had retained the dancing to the end though; a Friday night spot if you could find a mate willing to drive you all there or chance the breathalyser later.

Next door to the Cherry Tree is a corrugated tin shack garage business, its closed-up showroom housing vintage Morris Minors and an eclectic collection of old toys and antiques. This too is up for grabs, the owner apparently having retired. As I poked around the derelict pub, a car drew up outside the garage and a man briefly hopped out to peer inquisitively into the windows, perhaps weighing up a change of career or possibly just a plot of land that might prove lucrative in future. 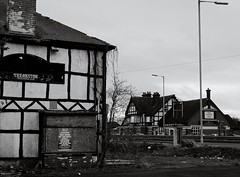 Across the dual carriageway lies the Raven Inn, sporting the same mock Brewery Tudor style of the Cherry Tree but still open and serving in the dog days of 2018. It’s hard to escape the feeling that the Raven is gazing across into a mirror reflecting a prophecy of its own inevitable doom: architecture as memento mori, Ozymandias in half-timbered, half-intact black and white. Reviews on TripAdvisor are mixed, with the accommodation faring badly (“never in my life have I experienced a shambles like it”), although the restaurant has a few fans prepared to overlook what sounds like a rather forlorn interior (“see past the decor and you’ll have good food and friendly service”). Forty years ago, your father or grandfather would have made it the penultimate stop when returning from North Wales, to round out the day with a slap-up family meal in genteel surroundings enjoying “traditional cooking”. Now its clientele consists of those who unwittingly stumble over it while googling for “hotel near Whitchurch” ahead of a work trip and connoisseurs who know that a shabby establishment often belies a decent breakfast.

The Raven in fact has a much longer lineage than its Johnny-come-lately upstart over the road, being apparent on maps from the 1880s and probably much further back. It seems likely that it would originally have been a coaching inn, as the location must have been a useful staging post on the long ride either from London to Birkenhead or coming up from Herefordshire towards the north. The Witch Ball and its pool, a large oval behind the hotel, are present on the 1950s map and even the 1970s one. On the latter, the Raven is the “Wild Raven Inn” and has by this point assumed its present outline; most probably, it would have been rebuilt in competing style when the Witch Ball arrived on the scene to cash in on Britain’s nascent motoring boom. 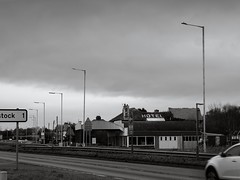 What future now for these punctuation marks of 20th Century road travel? The motorways have abstracted all the long distance traffic, so only those who prefer the scenic route or have local deliveries to make are likely to be passing, and even then modern, reliable vehicles and convenient bypasses mean that you won’t require an overnight stop or proper meal to break your journey. It’s four hours from Cardiff to my home town of Warrington along the A49, and while I’m ready for a break after a drive of that length, I don’t need a full hotel dinner midway to keep me going (although I’m now thinking I should have a swift Coke in the Raven one day for posterity’s sake). Today, a location like this would normally merit a Pizza Hut or drive-in Macdonalds to catch the family trade coming back from shopping at weekends, but perhaps that market is already saturated. For the Cherry Tree, the war seems over, the building by all appearances too far gone to justify renovation even if its location could once again support two such hostelries. On the other side, the Raven overlooks a normally busy lorry park and weekend bikers meet, but they prefer the Midway Truck Stop just before it. The Raven’s own car park at least wasn’t empty when I passed through, and they’re clearly buggering on for now, but absent funds and the impetus to invest in it, its gentle decline will not be reversed any time soon.

« A note about benches Panasonic GX80 with Darktable »