2020 has, I think we can all agree, not been a vintage year. Other than a brief, late burst of schadenfreude from across the Atlantic this month, it feels like the news has been unrelentingly grim, our lives are paused and nobody can foresee what will be left to us in twelve months time of the life outside the home we used to take for granted.

On the other hand, if you just want to stay inside and listen to records on the old Dansette this autumn, it may yet be a good year for a trio of remarkable albums released fifty years ago that have still not received due notice outside the circles of collectors.

Next month, Earth Recordings will release 50th anniversary box set editions of the only two albums by the band Trees. And last month, the sole album by Mellow Candle received a rare official release in limited edition white vinyl for Record Store Day.

In 2020 these are not, to be sure, particularly obscure rarities. Both have been easily available on CD for the past decade, the Trees albums being reissued by Sony (following use of a sample by Gnarls Barkley) and Mellow Candle by Esoteric, all in 2008. Among enthusiasts of ‘lost’ treasures of the early 70’s prog era, those bands and albums that sank without trace in their day, they’re now common currency although still highly regarded, regularly appearing near the top of lists of ‘classic’ acid folk records. Outside that tribe though, they have much lower recognition, which is a shame as to hear them is to cherish an encounter with the heady experimentation of 1970/71 at a time when the cultural adventurism of the late sixties was bearing arguably the richest fruit.

Of the two Trees albums, their 1970 debut “The Garden Of Jane Delawney” is a tentative, uncertain affair, offering extended ensemble jams based around traditional tunes (such as the notable soloing that closes their version of “Lady Margaret”) amidst occasionally slender material of their own composition, the clearest exception being the title track which sounds as timeless as any folk standard. (Not surprisingly, it has been much covered since, including versions by Francoise Hardy and All About Eve.)

“On The Shore”, recorded later that same year by a markedly more experienced group, is assured by contrast, striking early gold with the oddly compelling tale of madness on the mountain, “Murdoch” (inspired by the surroundings of Cadair Idris), one of my favourite lyrics:

Vocalist Celia Humphris was not a natural folk singer by inclination but brought her drama training to bear in playing one, with a lower register that could be by turns delicate, haunting, or portentously imperious on a track like “Fool”. (It did no harm that she also looked the archetypal boho-hippy ingenue of the period; there are no bad pictures of Celia Humphris.)

The record peaks at its midpoint on their definitive, unique rendition of the Cyril Tawney tune “Sally Free And Easy”. Recorded live, with producer Tony Cox filling in on bass while Bias Boshell moved to the piano, it’s an astonishing ten minute diorama of a group of musicians working entirely in sympatico, rightly described by Stewart Lee in his sleevenotes to the 2008 reissue as “one of the greatest recordings by any British band ever”. Tawney’s lyric is redolent of pressganged sailors from naval frigates dying on distant shores as they mourn faithless lovers, making the track an effective counterpart to the title cut “Polly On The Shore”, but it was actually written from the perspective of a submariner. Tawney himself thought Boshell’s floridly melodramatic piano opening sounded like “a silent movie soundtrack”, but it quickly subsides to a soft acoustic shimmer that builds with unnerving control through two verses before exploding into wild abandon alongside the double-tracked wailing of Celia Humphris. Heralding this shift in dynamics, the delicate underlying arpeggio that has accompanied the music this far gives way to a single, chiming note insistently struck off the beat - the fortuitous result, in fact, of guitarist David Costa’s fingers giving out at this point. The maelstrom that follows is intense and unearthly, the wretched lament of a curtailed mortality meeting acceptance of the imminent embrace of the grave; it pulled me up short as I was playing the album for the first time while slaving over Christmas dinner in 2010. As it subsides again gradually to a closing verse of final, bitter regret, the sense that you have just witnessed that fleeting moment of clarity between inspiration and enervation, when the Muse alights upon a group of musicians labouring away in the studio late into the night, is inescapable.

It should have been the end of the beginning for Trees, putting them on a firm heading for the rewards from the successful melding of psychedelic rock and folk music. Instead it marked their high water mark as, starved of record company attention and funds, they quickly grew disillusioned at being unable to capitalise on their discovery. A modified line-up soldiered on for a further couple of years, long enough to leave behind one poorly recorded bootleg of live sessions, but by the end of 1973 it was all over for them.

As Trees were entering their eclipse, Mellow Candle were recording their sole album “Swaddling Songs” in December 1971, for release the following year. Moving to London from Ireland in the wake of an unsuccessful psychedelic pop single and a few false starts during the previous four years, they were contracted for one record to Deram. There is no trace here of the loosely improvised rock jamming that characterised Trees; instead, the arrangements are tightly disciplined with not a single note sounding left to chance. But the music is often exuberant and pell-mell, like a trad folk session in full flight behind the locked door of the local pub after hours. Although it is clearly informed by and belongs to the folk idiom, it is not of the tradition. There are no standard covers here, only a strong set of strikingly original material fronted by the interweaved harmonies of Clodagh Simonds and Alison O’Donnell in an exquisitely sympatico band setting that refuses to indulge in any of the standard rock gambits to serve the music. (They may also be the only band to have lost one bass player because there were “too many drugs taken” and a second because there “weren’t enough drugs taken”. In contrast, Trees, with their extended free-for-all jams, did not indulge at all.)

Perhaps the only flaw that can be levelled at the opening salvo of “Heaven Heath” and “Sheep Season”, the latter featuring a soaring vocal harmony in the chorus that’s eerily prescient of Abba, is that by putting the two songs with the strongest immediate appeal up front, the rest of the album then demands closer attention from the listener to fully appreciate the craft involved. But the sheer quality of tracks like the spectral “Reverend Sisters” with its restrained piano backing by Simonds, the dramatic “The Poet And The Witch” or the manic “Boulders On My Grave” shines through.

Once again, it cast barely a ripple at the time. Lack of support and promotion did for Mellow Candle exactly as it had done for Trees, and with a more brutal impact on relationships within the band. The partnership of Simonds and O’Donnell was sundered for the first time since high school, and both moved on to find other ways of making a living from music. 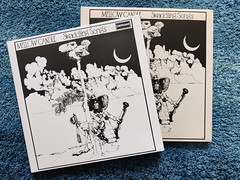 Fortunately, today all these albums have been rediscovered, buffed up and widely distributed so that we can fully, if belatedly, savour their unique, never-to-be-repeated vignettes of the early 70s milieu, when for a brief time every possible future in popular music was up for grabs if you were only receptive to the surrounding vibes. True, official releases of any of them on vinyl are often harder to come by and usually only in limited editions, but reasonable facsimiles are floating around eBay at affordable prices and besides, there are always the CDs if you want the best sounding versions rather than the period-authentic ones. (A few leftovers of the Mellow Candle RSD LP can be found on eBay at time of writing, along with a more common pressing on the Tapestry label of dubious provenance but tolerable representation. For the Trees albums, get your pre-order in now.) If I can round this recommendation out to a solid trio of acts, you should also pick up the Esoteric reissue of Fuchsia’s self-titled 1971 album - a record occupying a unique niche between psychedelic folk/rock and acoustic pop from a band line-up that featured an all-female string & backing vocals section, it’s a remarkable achievement of writing and arrangement by leader Tony Durant.