Yesterday I went to the National Museum of Wales in Cardiff for a lunchtime talk by David Hurn on his Swaps exhibition, currently showing in the museum’s newly-opened photography gallery. (It’s an excellent and illuminating display, incidentally; one of the few chances outside London to view prints by the likes of Cartier-Bresson, Robert Frank, Dorothea Lange, Elliot Erwitt and many other gifted photographers.) 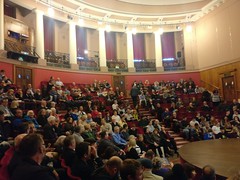 There was an impressive turnout for a midday event, and the auditorium was almost full. David Hurn in person was enthusiastic, amusing, enlightening and exactly light enough for a lunchtime interlude without patronising his audience or neglecting to inform. His talk was entitled “Collecting Bus Tickets”, in a conscious effort to demystify and play down his achievement. The accompanying slideshow picked out highlights from his collection of work by other famous photographers gained by his habit of exchanging prints, or else featured key images from his lifetime - including the endoscopy of his bowel, included to demonstrate that we can’t be too precious about photography and because it had saved his life by pinpointing the exact location of a cancerous tumour that was successfully removed by surgeons a few years ago. Another memorable highlight was the image of the Soviet soldier buying his wife a hat in Picture Post, which changed David’s life and set him on his eventual path because of the moving parallel he drew with a moment from his own parents’ lives.

However, I did feel that a couple of his observations were off base. On a minor note, his opening remarks that “the family album” was the most important possession for most people probably betrays a traditional understanding of domestic photography that no longer holds true and arguably hasn’t for some time. I can take his point that family photos may hold enormous sentimental value, but the notion of them still gathered physically together into a canonical book seems a little quaint today. I have albums of pictures from one or two notable holidays and a large one holding photos of the first year or so of my eldest daughter’s life - plus several hundred more of both my children still loose in the sleeves from the lab, which will most likely now never make it into an album unless I get bored in my retirement. In the event of a fire, I’d struggle to put my hands on any of them and it probably wouldn’t occur to me to try, nor the folders of negatives and slides, the backup disks or, most critically, the fileserver hosting all the raw image files of the last fifteen years. I’d be saddened by the loss of this archive of my life, but at least I’d know the important images themselves were still available to view via an Internet connection - held by Google and Flickr (probably Facebook for most other people). The family album, in its traditional sense - has that truly existed for more than a minority of families after about 1990, let alone in the age of smartphones and cloud storage?

The other remarks that similarly failed to recognise how the world has moved on were his slightly frustrated complaints that “photography students don’t swap prints”, as he has always done, aimed mainly at the many students from the local arts courses in the audience that day. “Are you really not interested in the work of your fellow students?” he asked plaintively. I think this viewpoint privileges two possibly outdated concepts: the primacy of the print; and possession of the physical representation of a piece of visual art. I’ll caveat here that I don’t know how photography students work today and whether they print a lot. But the notion that they have no interest or sight of the work of their contemporaries must be preposterous; I’d challenge you to find any generation more aware of the photographic exploits of their peers. They may not be swapping actual prints, but they are certainly liking each others images on Instagram, pinning them on Pinterest, curating them on Tumblr and building up an entire linked ecosystem of the Commons based on their own images and those of their friends. How much photography students do this with each other’s work, I’m not sure, but I know for a fact that USW students at least are following and retweeting their mutual accomplishments on Twitter. It may not ever result in another tangible personal collection as valuable and important as Hurn’s own “Swaps”, but it is nearly all publically and globally accessible for those looking.

Incidentally, do you find yourself, like me, pinning endless wonderful images on Pinterest but never actually going back to review and enjoy your boards? You’re not alone - David confessed that most of the prints he received, other than the ones he elected to hang on his walls, went into sleeves and archival boxes, and were never viewed again until now. If nothing else, one enormous benefit of David’s generous bequest to the museum will be the opportunity for many more people to assess these images as a group and draw new connections between them and the development of photography as a whole in future. The first fruits of this process will be the museum’s next exhibition once Swaps is over next Spring, highlighting the work of female photographers. David himself will be in conversation with Martin Parr (who has just opened his own foundation in Bristol to further the artform) at the museum in February, an event I unfortunately won’t be able to make but which will be a great evening for those who can.

« Ansible: Using host info on other hosts A Stark Decade »